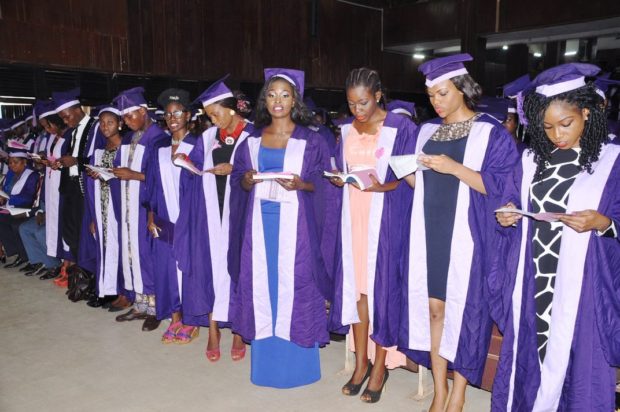 In this year’s Convocation Ceremony of the University of Benin, a staggering 9,993 graduands will be the least number of persons who will be awarded various diplomas and degrees. This was made known to the public by the Vice-Chancellor of the University, Prof. Faraday Orumwense while briefing newsmen on the line-up of activities marking the 43rd Convocation and 47th Founders Day Ceremonies starting on the 22nd of November, 2017.

According to him, 100 of these grandaunts would be awarded a first class honors with 1,843 Second class Upper and 4,607 second class lower degrees.

He further stated that, 1,351 third class, 188 diplomas, 152 post graduate diplomas and 527 unclassified would be awarded.

The Vice-Chancellor also noted that, an aegrogat degree would be awarded to one of the graduands, An Award conferred upon a candidate on the presumption that the candidate is unable to continue its studies, though, would have satisfied the standard required for the award if the person was able to continue.

Some of the notable personalities who will be recognized during the award ceremony include ex VC Prof. Grace Alele Williams, Dr. George Agbolanhor and prof. Louis Ojogwu who wil be conferred with the title of Professor Emeritus.

“A total of 1120 would be awarded masters’ degrees and 102 awarded doctorate degrees.

In his words, “The four-day event will include project inauguration, as well as conferment of honorary degrees on three distinguished personalities’’.

The vice-chancellor revealed that the institution, within the period between the last Convocations and now, has made giant strides in the area of infrastructural development and renewal, adding that it also signed Memoranda of Understanding with some companies in the area of academic research.