Home Gist Looking Back; Uniben 2017/2018 Never to be forgotten Memories…#UnibenRetrospects

Looking Back; Uniben 2017/2018 Never to be forgotten Memories…#UnibenRetrospects 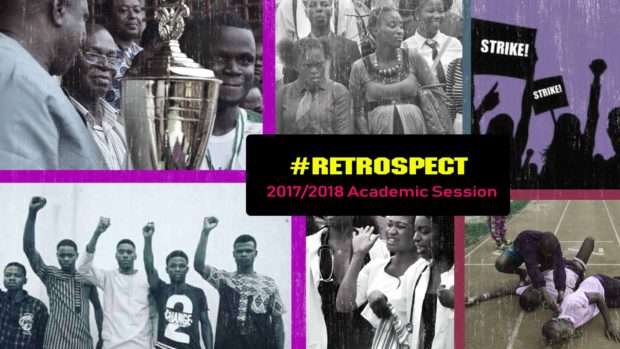 The exams for the 2017/2018 Academic session at the University of Benin is more or less over and the spirit of many is soaked in overwhelming joy- Final year students finally, are now graduates, Pen-Ultimate students are now FYB (Final Year Brethren). For the most part, it is a new level for all students of the prestigious Uniben.

Now it is time to relax and enjoy the very long holiday ahead, not forgetting the Christmas which is drawing nearer.

Amidst the joy and celebrations, the joy 2017/2018 academic session without doubt has made a remarkable foot print in the minds of all who were involved with the play of events, especially management and the students who are the key players as events unfold.

Many remarkable events took place, both exciting and boring, I mean a little less exciting, some we would love to remember and others, we strongly desire to be wiped-off our memory. Of these, the following will for sure, will always be in the sand print of uniben’s history for a long time to come.

The first semester of the of the session resumed with the school management making moves to increasing the charges for school fees, Hostel fees, acceptance fee, for the newly admitted, transfer fee etc. The move met with much opposition from the student community especially its leadership,the student Union Government talking about the Student Union Government (S.U.G), led by its newly elected president, Hon. Ogbidi Osemudiamen Elvis.

The tension between the Management of the University and the Leadership of the Students’ Union Government continued to soar as the two bodies held several meetings to enter into a consensus, but these all failed. The S.U.G Leadership vehemently resisted the move by the University management and as the days passed on with no reasonable agreement between the two parties, the Student Union leadership took steps to prevent its fellow students from making payments.

To the S.U.G and most of the students, the increase was outrageous and unfair, to make matters worse, this was coming at a time, when the people and the nation faced with hard economic challenges.

All this resulted in a peaceful protest by the student community on the 23rd of November at the University’s Ugbowo Campus.

Less than 24 hours to the peaceful rally by the students, the school management issued a circular, asking students to evacuate the hostels and the campus premises. This was how the new semester and academic session witnessed an abrupt closure.

Following the closure, was shock-giving blow from the management, the Uniben five were rusticated by the school Authority, four of the students’ executives including the president, Hon Ogbidi Osemudiamen Elvis were rusticated and a student.

Following much opposition and appeal from the student and international community, the decision was recalled by the Management.

The rusticated executives were never reinstated to office, as the Vice President, Frances Okogwu became the acting president of the Union.

Increased in the cost of Transport Fare, both Cab and Shuttle

The session saw a raise not just in school charges alone, following an increase in tax levied upon shuttle bus drivers by the Edo state government, the price of bus from Ugbowo campus to Ring Road and New Benin was raised from N50 to N70. The Union did its best to avert the increase but, the increase was eminent. This was shortly followed by an increase in the price of cab service within campus from N100 to N150.

Strike  Strike Strike, the music we all hate but dance to…

it is a common thing for every Nigerian student attending a public institution to experience at least a long-lasting industrial action by the powers in charge of theinstitution management in the nation. The 2017/2018 academic session was no different.

Following warning strike by the Academic Staff Union of Universities was an indefinite strike which lasted for a period of three months, beginning from August 2017 to September that year.

Months later, the joint Action committee which comprises of the Non-Academic Staff Union of Educational and Associated Institutions (NASU), National Association of Academic Technologists (NAAT), and the Senior Staff Association of Nigerian Universities (SSANU) took to industrial action with allegations of neglect by the federal government and the leadership of ASUU following a lob-sided sharing formula on the funds released to the universities. From the 10th of December 2017, the J.A.C remained strike, thereby crippling the most academic activities, even the bulk of academic activities was affected by the strike.

And just recently, while exams were ongoing, ASUU had embarked on another warning strike alongside the Nigeria Labour Congress(NLC).

No More Fellowship or religious groups, activities on ban till further notice

Fellowships and religious groups on campus were sent packing after the Students’ affairs department put a ban on religious groups on campus. Fellowships were left scampering for venue as students who do not attend All Saints, St. Albert, the School Mosque/Hostel Mosque were not allowed to hold activities on the school Campus. After much talks by the Christian Community on Campus, and concerned bodies, the ban was lifted with terms of conditions for operations on campus.

Many more events did happen during the session,

Congratulations from all of us at eUniben and wish you a wonder experience during the holidays.

For all the latest UNIBEN updates, Download the eUniben android app by clicking here
Previous PostNIGERIA IS NOT FREE; UNIBEN Student Expresses his Thoughts... Next PostStrike Suspended, Exams in UNIBEN Continue