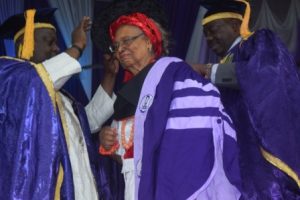 Prof. Grace Alele Williams, a one time Vice-Chancellor of the University of Benin, Benin City has been conferred with the Honorary Degree of Doctor of Science after due consideration by the University Senate and approval from council. The conferment was done at the 43rd Convocation Ceremony of the School.

Others who received outstanding awards during the Ceremony include, Chief Dr .George Osemwengie Agbonlahor (JP), who was awarded an Honorary Degree, Prof. Louis Ikechukwu Ojogwu conferred with Emeritus Professor.

This was the University of Benin’s 43rd Convocation ceremony, and was graced by dignitaries such as the Chancellor Muhammad  Sanusi  II the Emir of Kano,  the Pro chancellor Rt. Hon. Isa Ashiru (con) , the Governor of Edo state ably represented by the Secretary to the State Government, Barr. Osarodion Ogie Esq , the Vice Chancellor of the great University Prof. F.F.O Orunmwense  FNSE and many other dignitaries from across the Nation.