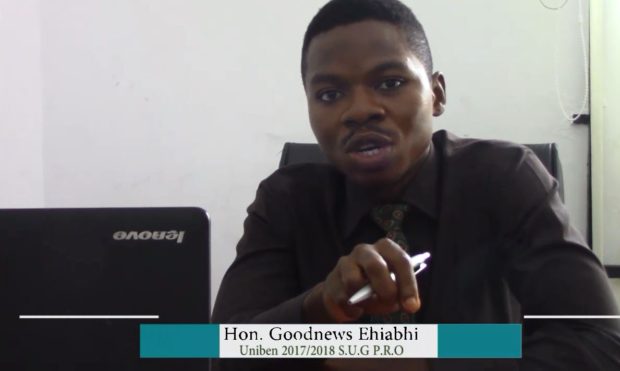 In an address to all Uniben Students, the students’ Union Government P.R.O Hon. Ehiabhi Goodnews, has affirmed that the resumption date for the new session 2017/2018 as stated in the new academic calendar has not been shifted and remains 12th of November 2017.

He further dismissed some of the rumours about the planned ASUU strike, noting that, the Federal Government has settled the Academic Union, therefore, there is unlikely to be another Strike Action taken by the Union in the foreseeable future.

Concerning Health Clearance, He stated that, is it is not compulsory for returning students and will not be used as a criteria for hostel space allocation. He made it known that, it is only compulsory for new students (freshers).

He went on to advising students to not send money to anybody online, with the promise to securing a hostel space. He called such persons fraudsters as they are only, out to scam unsuspecting students. He urged that such incidences should be reported to the office of the P.R.O for appropriate actions.

He further emphasized the fact that, Admission into the University of Benin is based entirely on merit and advised Aspirants to not send money to any person promising them admission.

Speaking on the coming session, he assured returning students, that, they will be coming into a system with structures in place.

He spoke concerning the “operation Light up Uniben” saying that it is aimed at reducing crimes during the night hours within the campus community.

He also threw more light on the Monthly Sanitation Exercise that will commence with the onset of the new academic session. He stressed the need for a clean and healthy environment.

He further assured every student that took part in the work study program to be calm and relaxed as the SUG “restoration Excos” are working tirelessly on resolving their matter.

Also, in order to ensure that, the good image of Uniben is portrayed before the entire world and curb the flux of false information, the P.R.O is introducing a consensus of publicists and bloggers. This consensus will consist of all bloggers and publicists within the school community.

In conclusion, he re-iterated the resolve of the restoration executives to its commitments to serving Uniben Students.

For all the latest UNIBEN updates, Download the eUniben android app by clicking here
Previous PostEdo Super Cup: Showdown as Uniben All-Stars Battle for the Trophy in Finals Next PostUniben S.U.G to Launch “Operation Feed Uniben Students” and More Programs