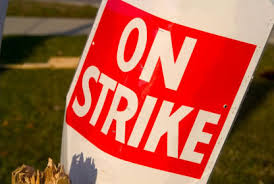 The Joint Action Committee ordered its members to embark on the indefinite strike, after it rejected a sum of N4.6 billion from the 23 billion the federal Government recently released to them, describing it as peanuts. According to it, the Federal Government has refused to honour the Memorandum of Understanding it entered into with the Committee.

Lectures and other Academic activities have also been affected by the indefinite strike.

Speaking with the press, the General Secretary, NASU and the Deputy President, NLC, Prince Peters Adeyemi agreed that all the unions on campus work together, adding that one union’s services complement the other. He explained that though ASUU is not on strike, the effect of the strike by the non-academic staff will definitely affect activities on campus including lectures, as students will be left with the option of going home if their non- academic needs are not met. Adeyemi vowed that the ongoing strike that has paralysed academic and non- academic activities for four days, will continue indefinitely until the Federal Government accedes to their demands.

According to the Chairman of the Joint Action Committee, and the National President of SSANU, Comrade Samson Chijioke Ugwoke, the method currently been used for the allocation of the funds will result in destabilizing the university system, thereby, causing disaffection among members of the university community.

According to the Action Committee, they are set to continue with the Strike till their demands are met.