Home Gist UNIBEN Graduate and 3 Others Nabbed for Robbery

UNIBEN Graduate and 3 Others Nabbed for Robbery

Wilfred Ehis, a thirty year old graduate of the University of Benin, from the department of Chemical Engineering was nabbed alongside three others; Bright Eloho, 24, Emeka Egbemedu, 22 and Olanrewaju Kamilu ,33 by the operatives of the Rapid Response Squad of the Lagos State Police Command at the Olamulti Hotel, New Site, Iba, Ojo, Lagos 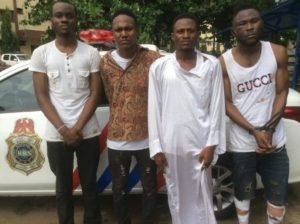 The gang which pretend to be online customers and buyers of mobile phones deceive the sellers of very expensive phones and then rob them at the place of delivery.

According to Ehis, He shops online for very expensive phones and goods and makes request for them to be delivered by home delivery service. He would send the delivery address to the sellers and on delivery, his so called boys would rob the unsuspecting delivery men. 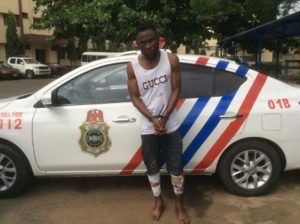 The four man gang while trying to avoid arrest some time ago had shot one RSS operative, Sgt. Garba Kadiri, after they were tracked down by officers at Pretty Street, Iyana School, LASU – Iyana Road.

He also stated that, he never participated in the robbery, for his duty was to shop online and order the items and then his boys carry out the robbery.

He went further to state that other boys were recruited to join them in the robbery operations.