Home Gist UNIBEN student, ‘Jennifer Belle Aise’ Boasts about Drugging a Toddler with Cannabis (Weed) because he didnt Greet her

UNIBEN student, ‘Jennifer Belle Aise’ Boasts about Drugging a Toddler with Cannabis (Weed) because he didnt Greet her

It is a popular saying that wonders shall never end, and indeed, and indeed, they’ve never ceased as we keep seeing and hearing of terrifying events nowadays. This was the case of Jennifer Belle Aise, who lives in Edo state, and a student of the University of Benin, Benin City who took to Facebook to brag about a dreadful act done against an innocent little boy just because he failed to greet her.

She may have a beautiful face with a cute smile, but what she did is far from that. According to her, she punished the poor boy by adding weed to the beans she prepared for him, who ate it believing that his beloved aunt has made a good meal for him. She posted a video of the boy under the influence of the drug on her Facebook wall with this comment “He didn’t greet me this morning so I decided to add some weed on his beans, Am I a wicked aunt?” 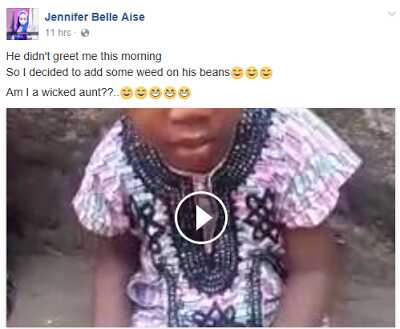 Sincerely speaking, anyone in her right frame mind should know that this form of punishment is uncalled-for, added to the fact that the use of narcotic substance such as weed is a serious and punishable offence by law.

Matters such as this, whether it was for fun or out of anger should be taken very seriously as abuse against children has been on the rise recently especially in this part of the world not to mention the side-effects such a hard drug could have on the boy’s mental fitness.

What makes the story more amazing is the fact that she is a university student, one is left to wonder the kind of person she is.

Giving an answer to her question; “Yes, she is a wicked aunt” and, a very wicked one at that.

And like the Bible said “the wicked will never go unpunished”, an outrageous act such as this one should never go unpunished. She should not only be charged and tried for possessing illegal drugs; she should also be banned from coming close to children with strict supervision. This will serve as an example to those monsters out there who may think of trying an outrageous crime such as this one in the future. 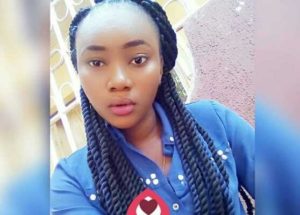 For all the latest UNIBEN updates, Download the eUniben android app by clicking here
Previous PostAn update about the resumption Dates for UNIBEN students in 300-level and above Next PostUniben Student, Others Die In A Ghastly Motor Accident